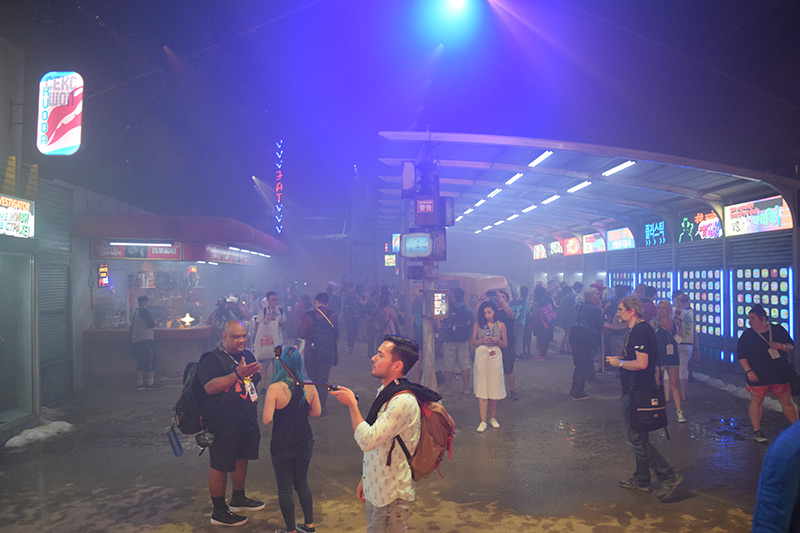 The biggest event Henry and I checked out at SDCC 2017 was The Blade Runner VR Experience outside the convention center. It was pretty dang awesome, but the 4 hour wait in the sun was brutal! We definitely didn’t expect to wait that long, but once we passed the security check, we were committed.

Once inside, you line up and wait a few minutes more in a dark (air-conditioned!) hall with photos from the movie production to look at. Then, they usher you into a small room with a few rows of VR chairs. They help you put on the VR gear and then push the play button so everyone can start the experience at the same time. This is something I think they were probably struggling with all weekend. We went on Friday and it seems there had been problems with people accidentally pressing the play button too soon or just having general technical complications that bogged down the wait time.

The VR experience included a chair that tipped, shook, and moved around with the video. We were sent on a flying car chase through the futuristic world of Blade Runner that eventually crashed landed in the middle of a cyberpunk-style street. When you took off the VR gear, the front wall of the room rolled up to present a life-sized version of the flying car crash in a neon-style street setting!

Entering the new area, actors and actresses slunk around in cool cyberpunk fashions. Guests could try out the Replicant Face Scanner, which was activated with the micro-chip bracelet everyone had been given while waiting in line. Guests could also claim their free shirt by interacting with a wall of video screens that would display their name.

In a room next to this street-area, there were little take-out containers with your choice of spicy or creamy noodles for people to sample. There were also shots of Johnnie Walker whiskey for ID-checked adults. The whole Blade Runner Experience was sponsored by Johnnie Walker, so people could try a flight of 4 different vials of whiskey before they leave.

Overall, this was the best event we saw at SDCC 2017! Even though the wait was crazy long, we still had a great time. Enjoy a few of the photos we took!